Today started out grand. Dry, fast, a little late and needed breakfast so stopped for coffee and a sellos. then spotted an open supermarket so food bought for the meseta.

This made us very late but not worried so we started to pick up speed then bang. First puncture. Glens bike. Tube changed, bang, my pump blew a seal. Different pump, bang, spare tube blew its valve. Another new tube, started riding, Glen noticed a wobble on the wheel, worse than before. Then the sidewall of the tire split.

To be fair Glen noticed some problems a short while before this and we knew that some of the larger towns we’d be passing through would have a bike shop but passing through at that all important “Spanish opening hours” seemed to be a challenge. So we put some hope in Sahagun. The terrain had flattened out and knowing the Maseta (the plains) were on their way I was also hoping this is where we’d be making up our distance if we’d not done so well over the first few days. We had done ok, but a few wrong turns and road signs to Santiago with distances that seemed to flick the “v’s” meant I’m sure we could do better. So with daily average to 150km it looked now like we’d struggle a little and we still had no idea of where that would leave us every night.

Passing through Da Carrion (which would be the butt of all jokes for a while after, “which way?” “We carry on.” “No we’ve already passed there…” Etc. etc. we entered Sahagun. Finding the bike shop Glen went in and emerged with two new semi-slick tires for 20 euros. Myles asked for a produce shop for fruit and veg and was given directions and I asked for a spoke key (was kicking myself for somehow forgetting it) and was met with a blank face. Tires were changed and dog poo stood in and we were off.

At this point we trusted more to the sign posts than the mapping. The trails we used were too minor to be on my road map (strapped to the front on the handlebars) and the GPS wasn’t showing any roads built after the 60’s (and later on it appeared to show roads it thought might be built in the future as well as incomplete roman roads…)

The villages got smaller and the links between them more obvious. Each village shouting in its own way it’s connection with the Camino, from wall freezes to catholic monuments and the route clearly defined by those well loved yellow arrows. Though it has to be said, the arrows pointed at all the cafes, shops and other businesses as well as the church on the way through.

So, we suddenly realised that the only hills were man made motorway bridges in the distance. The pylons could be counted until they were tiny dots and the Camino pathway still ran by the road which must really irritate the walkers. Infact, I noticed at this point that if you wished a pilgrim “Buen Camino” some would come up with a snotty “thanks” instead of returning the acknowledgement. Could it be that they didn’t see cyclists as real pilgrims? Weirdos….

We stopped dead centre of this flat plain at a shelter with a man sat with his shoes off eating pineapple chunks from a tin. Turns out he was Dutch and started his pilgrimage from home in July averaging 25km a day. He started to talk about the nationalities that do the Camino and the differences between them. He mentioned the Americans and I quickly added that we had “found one” and pointed to Myles, who at this point was laughing to himself whilst listening to a podcast. I did this as I thought he was about to slag them off.

The man then approached him and produced a book. He was doing a survey of the Americans and would ask them their first name, place in America they had come from and take a photograph of their face. He walked over to Myles and reeled a few off. He then said Myles couldn’t be in his survey because he wasn’t a real pilgrim. Closed his book and walked back to his seat. Myles said smiling at him that he couldn’t have a photograph of him anyway. I asked the man how he was planning to get home. “Oh by train or the Airport”, so I told him that if he was a real pilgrim like in the olden days he would be walking back again and we rode off.

We passed through a number of tiny Camino villages which are obviously catering for the pilgrims very well. I remembered the Dutch man also saying that a lot of the Americans caught the train from Burgos to Leon as they’d read it was boring! So I told Myles that if he attached the middle sized plough from a field to his bike and dragged it to Leon he’d be a true pilgrim. We joked that we could just take the larger one on the train. He then told me the story about when he passed from France to Spain. He stopped at the border and p#**#d back into France! Oooh you ‘mericans!!!!

It was dark by the time we got into Leon. Some cities just look brilliant in the dark though. My GPS took us around the pilgrim route because Leon likes to hide it (it could just be because it was dark!) and we turned the corner to the magnificent cathedral. Myles was talking to a man who then came over to Glen and I and asked us for money. I refused him and Glen reinforced this. I then realised Myles had been quite polite and wondered if I’d just been cursed for my abruptness. Instant regret and I’m sure I’ll learn from this.

We cycled on. GPS did good this time and we landed at Virgen del Camino on the outskirts of the city. Very late and all the albergues were closed. Myles negotiated a room in a hostel and the bikes stayed in the boiler room. Nice and warm with our remaining wet clothes hung on the bikes we ate at the local cafe and went to bed.

This blog: Tony Hemans and Glen Eccles cycled the Camino Frances from St jean Pied de Port in France to Santiago de Compostela covering 845km in 6 days in October 2012.  If you are trying to get fit, planning an adventure, long distance cyclist or just curious about my mid-life crisis then subscribe and share! 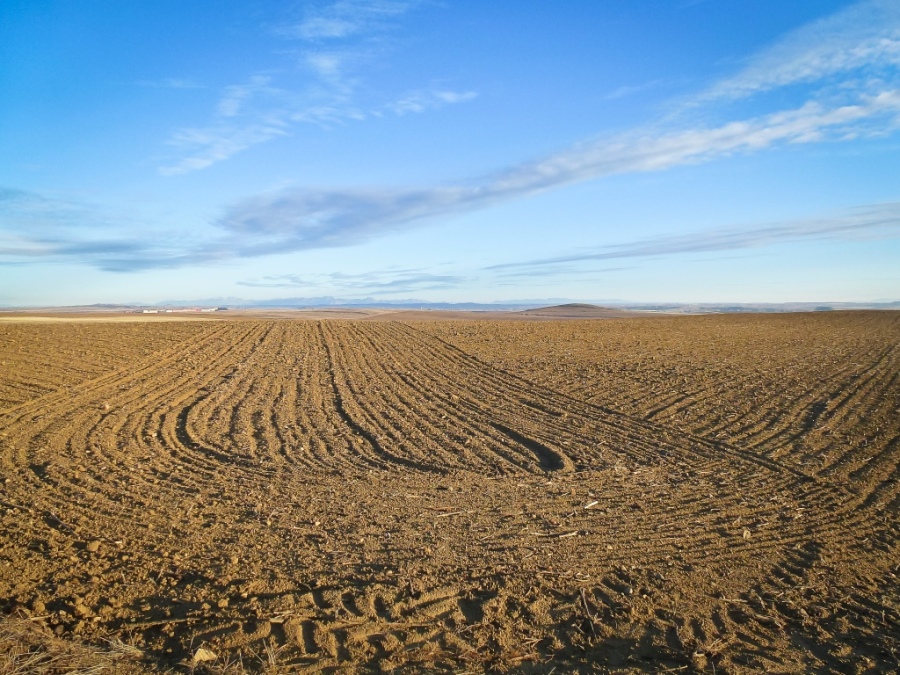 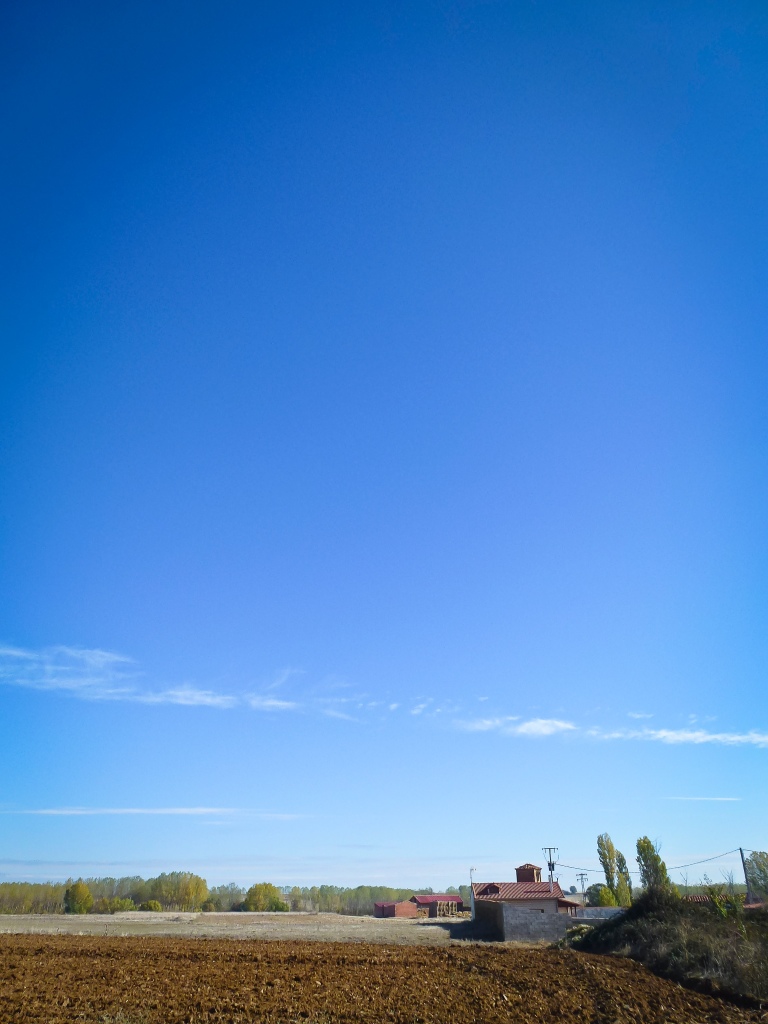 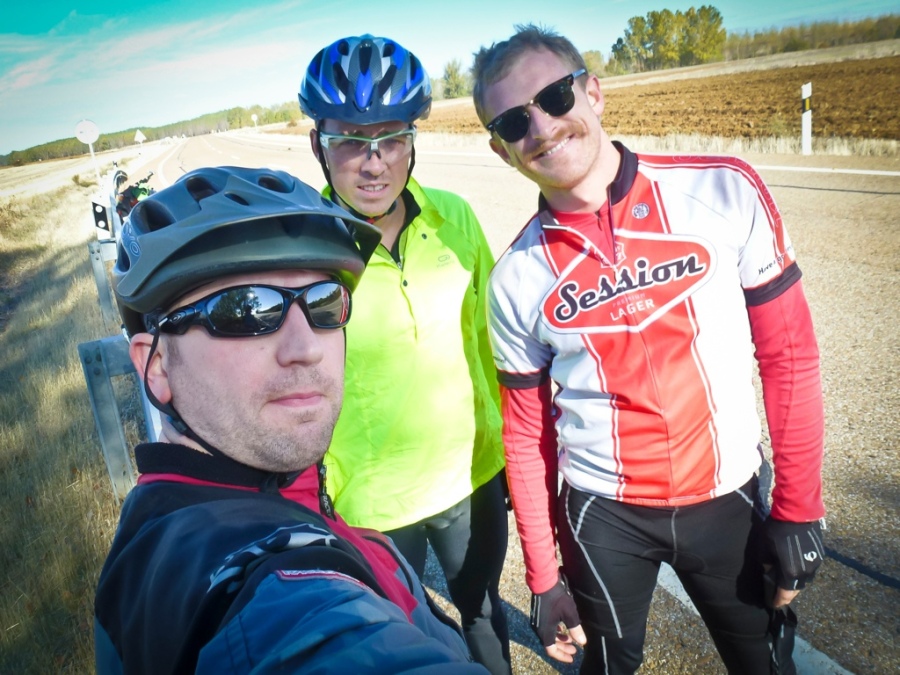 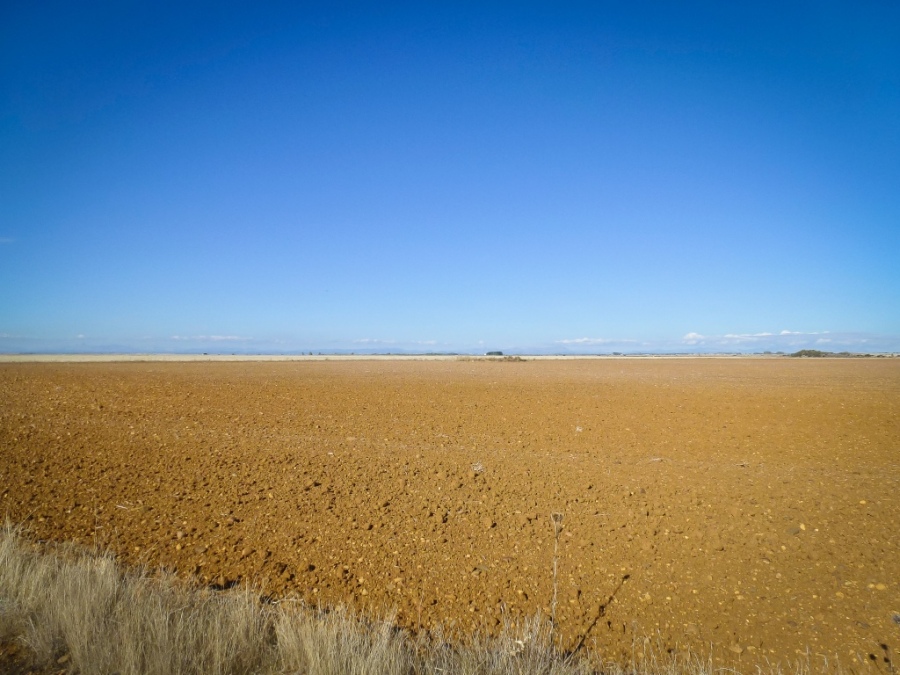 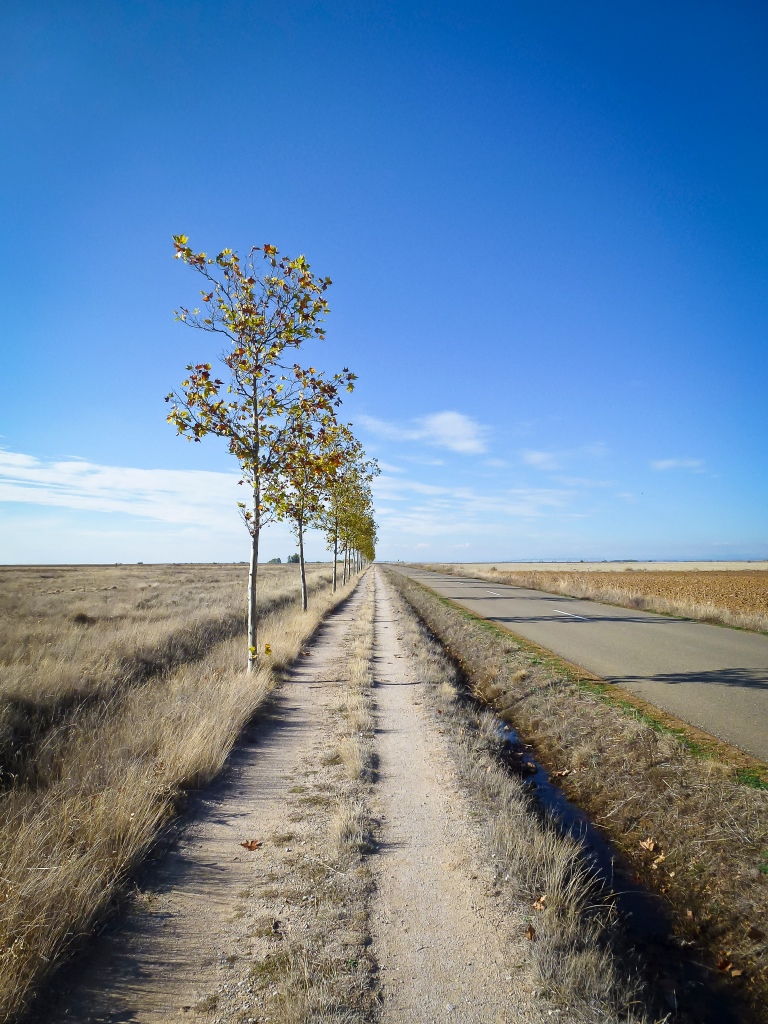 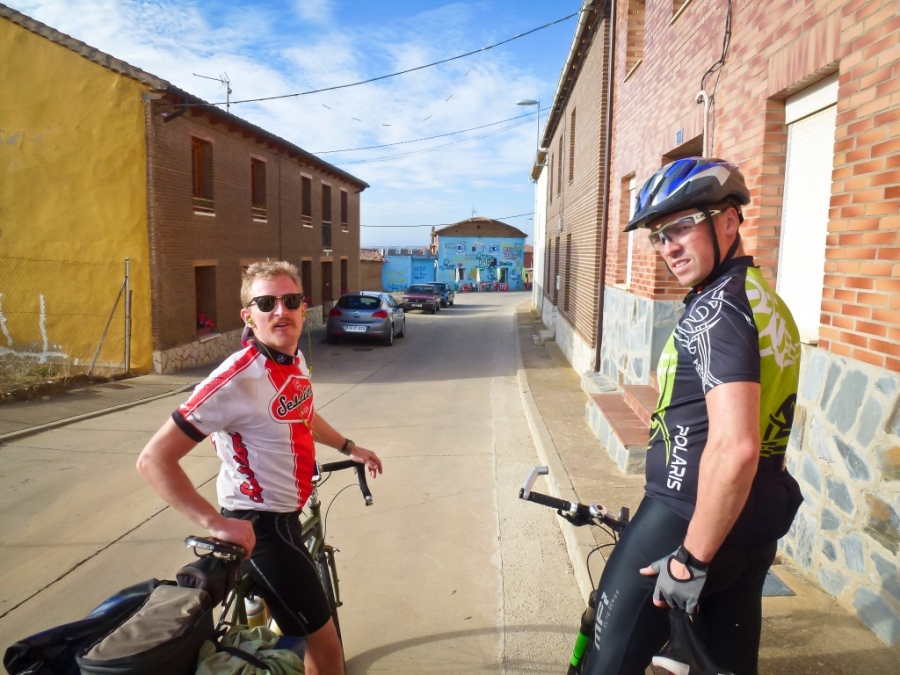 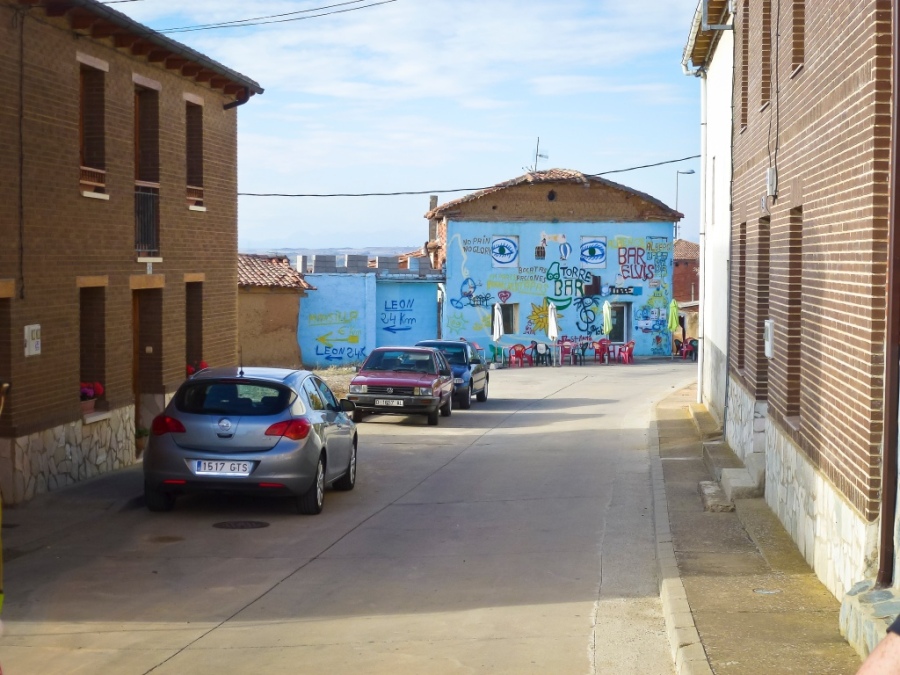 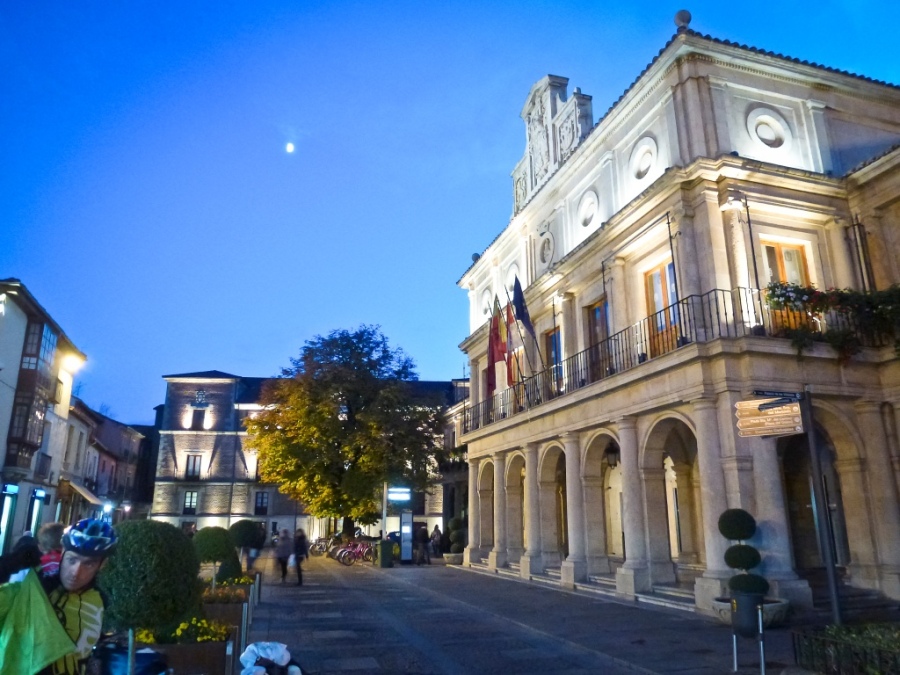