School boy errors. I put my bike next to Glens and we locked them together because we are paranoid. We slid bins up to the corner to block out some wind and I put my poncho on. I sat cross legged and tried to eat the sandwich. I’d definitely chose the wrong meat. I sat a short while and realised if I dropped off I’d literally drop off the stone ledge. So I lay. Glen had gone straight to trying to sleep but I was struggling. I kind of saw this as temporary. We’d be off again soon. An hour went by and we definitely wouldn’t be going soon. The wind picked up and was flowing under the bins. I looked through all my cameras pictures (I’d left the ones of the kids on, Lucy’s birthday too) and I tried to learn a little more Spanish with my iPhone. I lay down and at this point thought it best to pull out the stops and make it comfy. Only took two hours to realise this!

Out came Mr Sleeping bag. Off came Mr Pannier who turned into Mr Pillow. Out from the bin came clean bits of cardboard to sleep on top of (Mr Mattress?) Off came my shoes and I took out the books to plan tomorrows ride with the bike torch. I’m not sure when I drifted off but I know I was having to stick my head through a gap in the poncho to stop condensation.

Then Glens alarm went off. He set an alarm? On a mountain top? Because he was afraid of sleeping in?

Anyway we slept in. Awoken abruptly by a walker using the tap. He was as shocked to see us as us him. It was still dark. I pee’d in someone’s garden (surreal this isn’t it? I assure you all this was on a mountain top.) and we packed up and set off. It was about 7am. We carried on up hill and to a stream of walkers being kicked out for the morning reached the top at 1396m Triacastela. Pushing down to Samos then on to Sarria we reached the point were most pilgrims start their journey. Traffic links here are good and you must walk the last 100km in order to qualify for your Compostela. 200km if you are a cyclist, (because its so easy.)

Sarria isn’t all that bad. I grappled with my back wheel again and we polished off a couple of doughnuts and cafe-con-lache and we were fine. The town is like the outskirts of other towns, but all the way through. We hit a major climb going out the other side and realised we were into roller coaster Galicia. Woo hoo!

We followed the walkers through the villages, the drainage channel through the middle of the road was smoother than the sides. Some very nice Albergues and rest stops along here. The rain started and it lashed down (technical term) I stopped under a car port and put my neoprene overshoes and extra waterproof jacket on. The walkers were getting drenched. It stopped a little so we plodded on. Moving away from the small side road where the walkers spread right out across the road and where the arrows seem to divert you to local businesses. One I’m sure even pointed towards a titty bar and was going the wrong way. A German took it against Glens better judgement.

This is my take on riding Galicia. To go up hill, you ride two up and one down. To go down hill, you ride two down and one up. Get me? It’s roller coaster country and you can make super fast time if you can power up those hills. If you hadn’t been feeling a little fatigued, for any reason.

So before long it was our turn for a down hill into Portomarin. The town of Portomarin is intriguing as its been moved. Up and out of the valley flooded by the construction of a reservoir. The church stands high on the hill and as the water was very low, the old buildings could be seen protruding the water below, they must have forgotten some. We descended with two other cyclists. I stopped outside the town and waited for Glen as the other two zipped by. When we got to the bottom I thought one was telling me off for not wearing my helmet. I had sweat rash on sweat rash so I just shrugged him off. Glen told me he was shouting that I rode “crazy”. I did that thing that either Cavendish or Froome did where you tuck your bum infront of your seat post right down against the top tube. Stops my jacket flapping about on the descent. As we got to the bottom a strange set of steps climb up from the middle of the roundabout into the village. A number of walkers were here waiting to cross. Then it was our turn for an uphill. Monster climb that took frequent breathers of levelling off, then up again. This continued until…. Forever. I stopped looking at the map and zoomed out the GPS to show the remainder of the route. The bike was getting hard to pedal as the back wheel was floating on its spokes again. As soon as I knew the distance left I just started to count down and use the direction of the road on the GPS to see where it would cut over the next hill. There was on average less than a kilometre down and less than a kilometre up. So sixty hills became forty, became twenty. We then hit the mother of all hills climbing up to the airport. Long and slow. I was watching the time. I knew the pilgrims office in Santiago closed at 9pm. I also knew from memory the last few kilometres were down hill. It was 7:45pm on that hill. Passing the airport. 9km to go. More uphill, down hill, up…..

Finally the decent started. The outskirts became the city and I zoomed in the GPS to show the waymarkers I had placed at each junction. We had to stop to put the bike lights on again. Join the traffic and through the modern part of the city in which they must see thousands of pilgrims on the last mad rush. The road became cobble and the cobbles became full of pedestrians. We had to walk. The surfaces were slippy and my back end nearly overtook my front as I tried to ride up a kerb.

We turned into the square in front of the cathedral of St James and across the full length stopping to shake hands. Into the office the rain was starting and I went up first. No queuing and obviously getting late for those behind the desk. They took my pilgrims passport off me and asked me to fill in a form. My right hand has been numb for days through the lack of blood supply. It didn’t improve my handwriting…..

They completed the passport with the final stamp of the cathedral. Dating it the 24th October 2012. I had completed the pilgrimage from France to the burial place of St James the greater in 133 hours and 30 minutes. Total climbed around 9600 metres. I was handed my Compostela which detailed my name in Latin and I asked where I could stay. I was told where the tourist information was on the same street. I phoned home whilst Glen went up to get his Compostela.

The tourist information office gave us a few addresses. All the Albergues in Santiago de Compostela are privately run so we just chose the nearest and walked the bikes down the street. 16 euros for a bed. Quick change. 8 euros for a pilgrims meal at the cafe round the corner. It was here we were treated like royalty. So humbling.

This blog: Tony Hemans and Glen Eccles cycled the Camino Frances from St jean Pied de Port in France to Santiago de Compostela covering 845km in 6 days in October 2012.  If you are trying to get fit, planning an adventure, long distance cyclist or just curious about my mid-life crisis then subscribe and share! 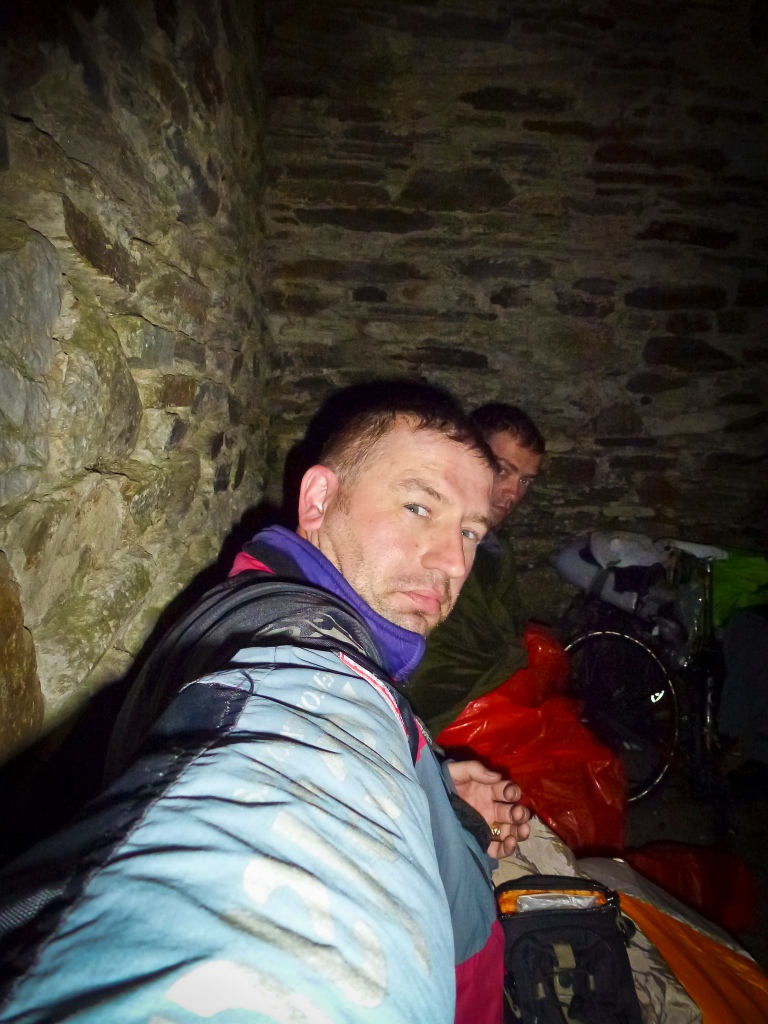 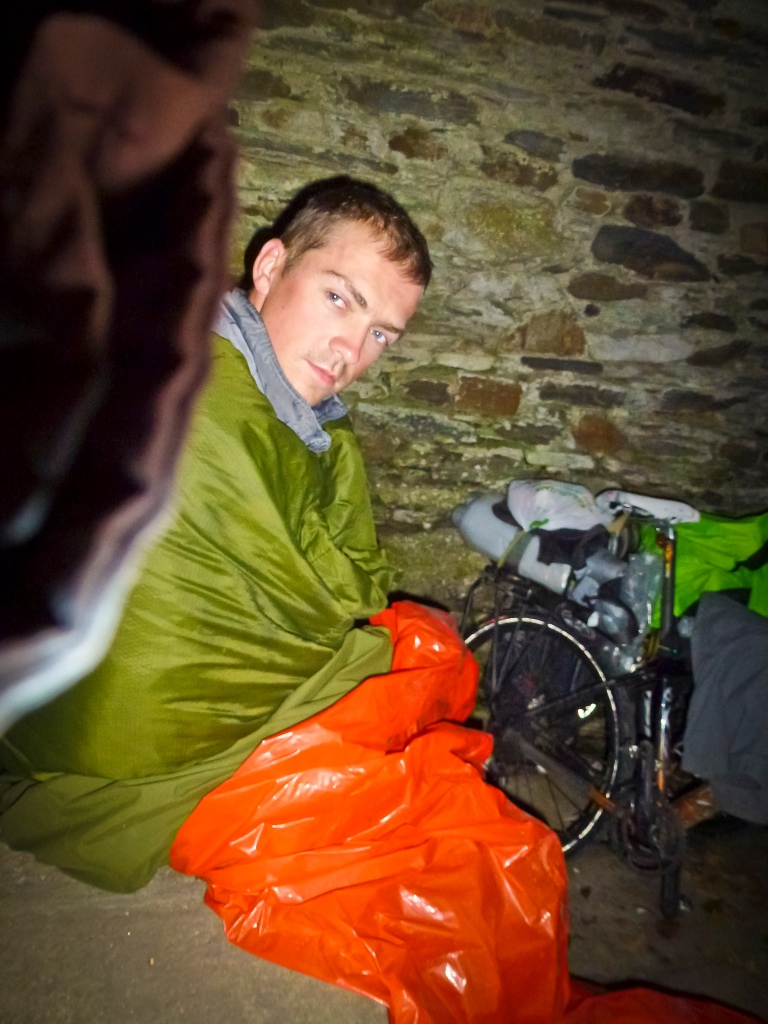 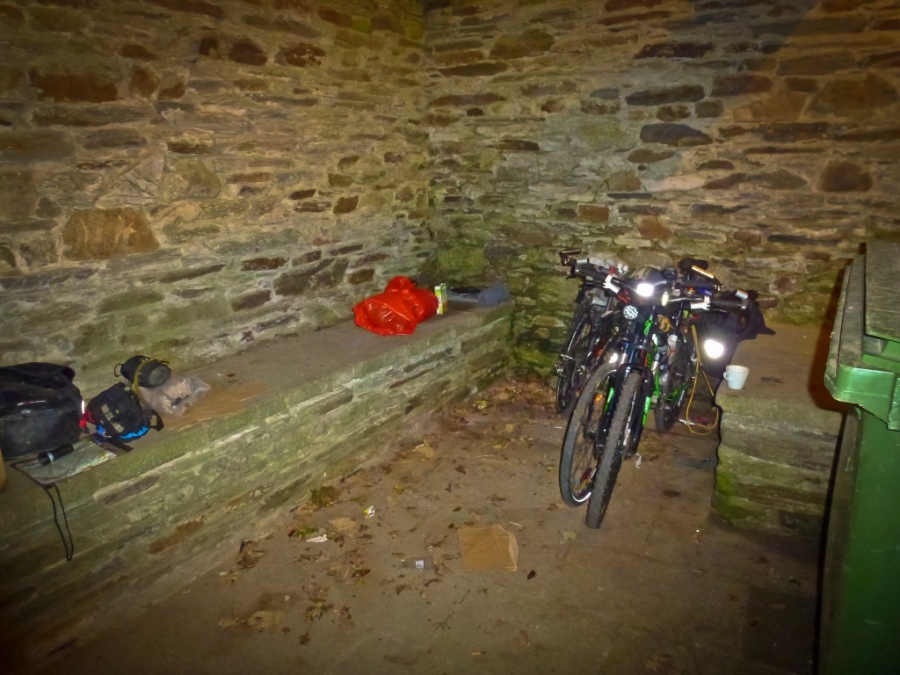 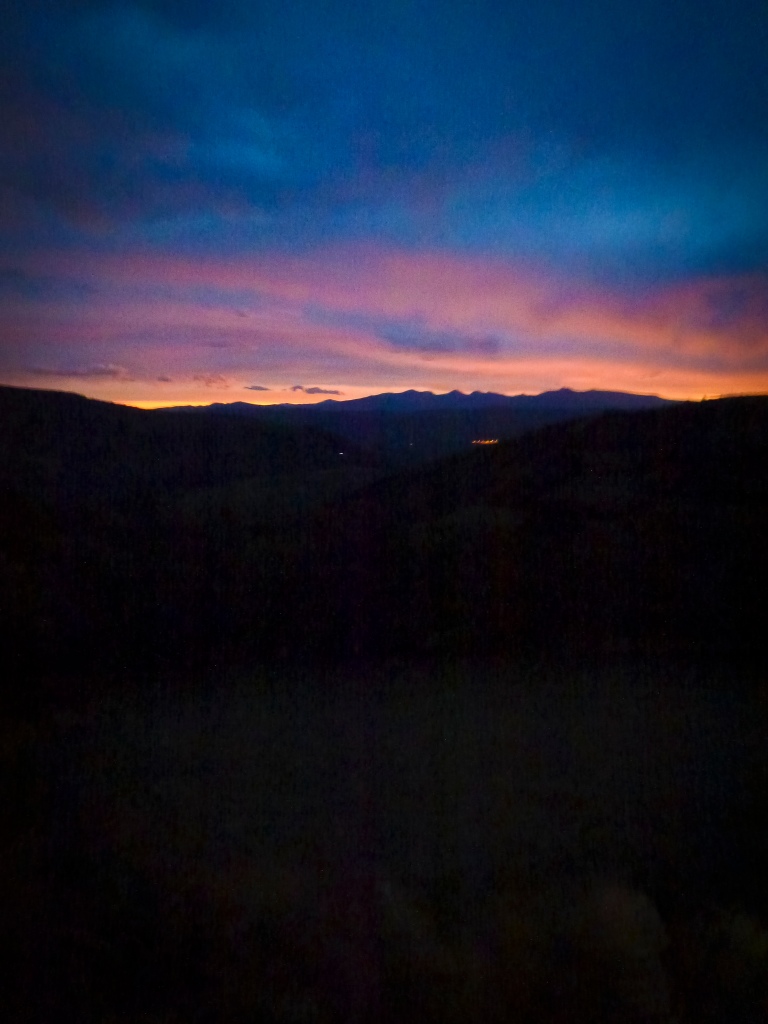 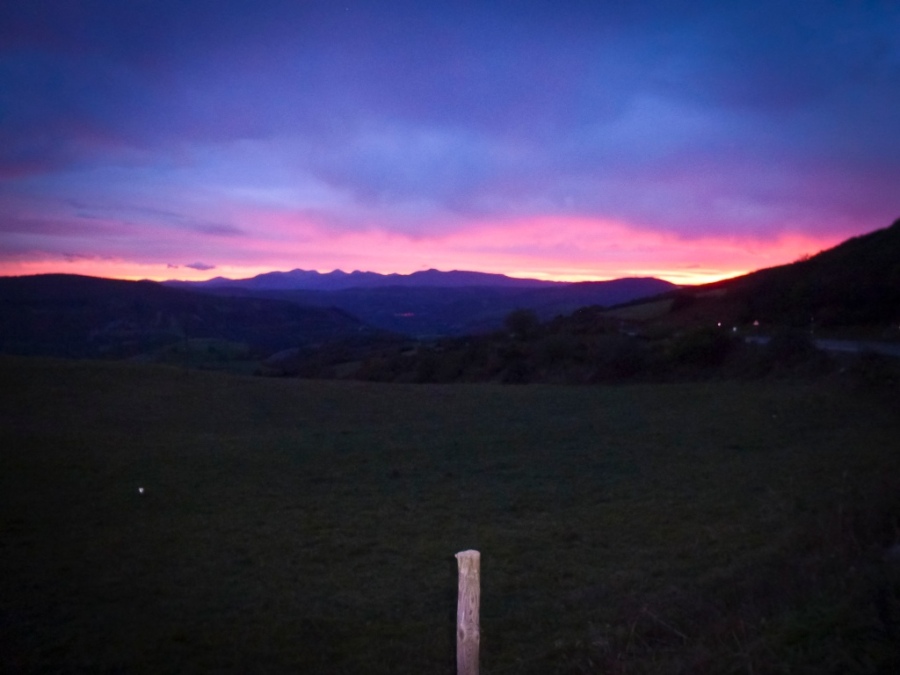 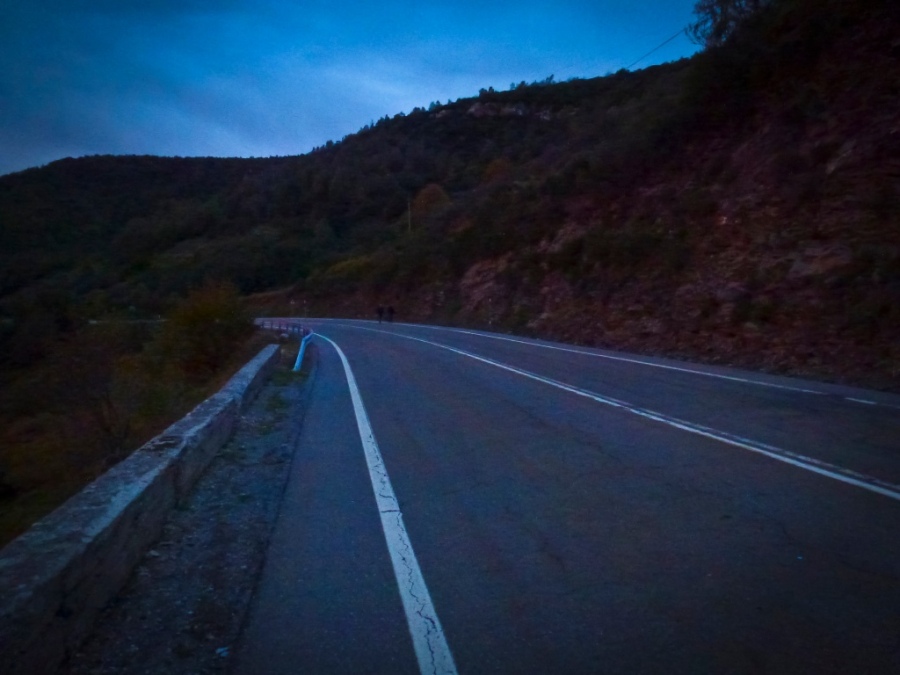 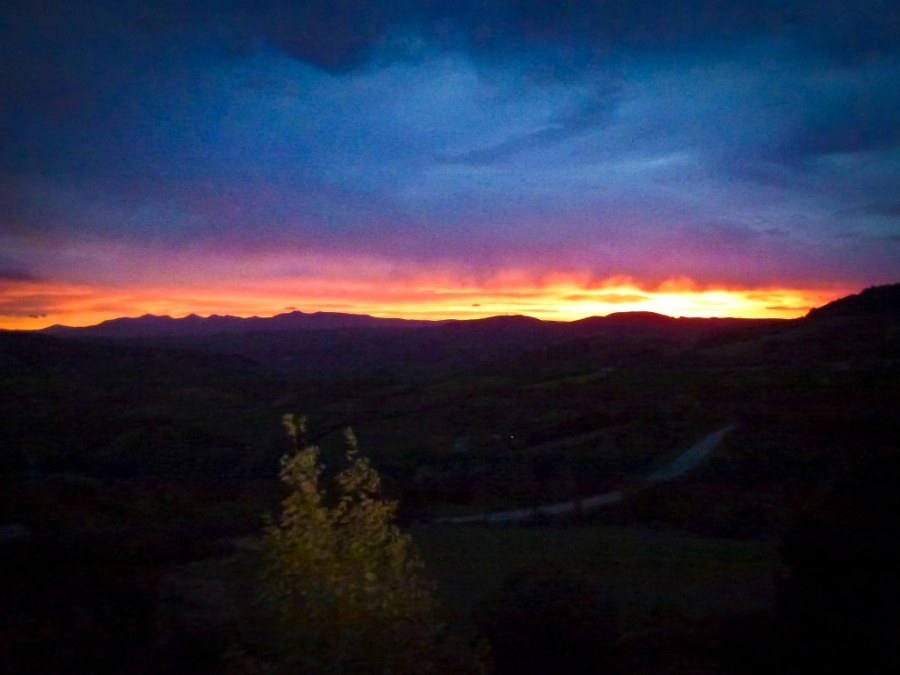 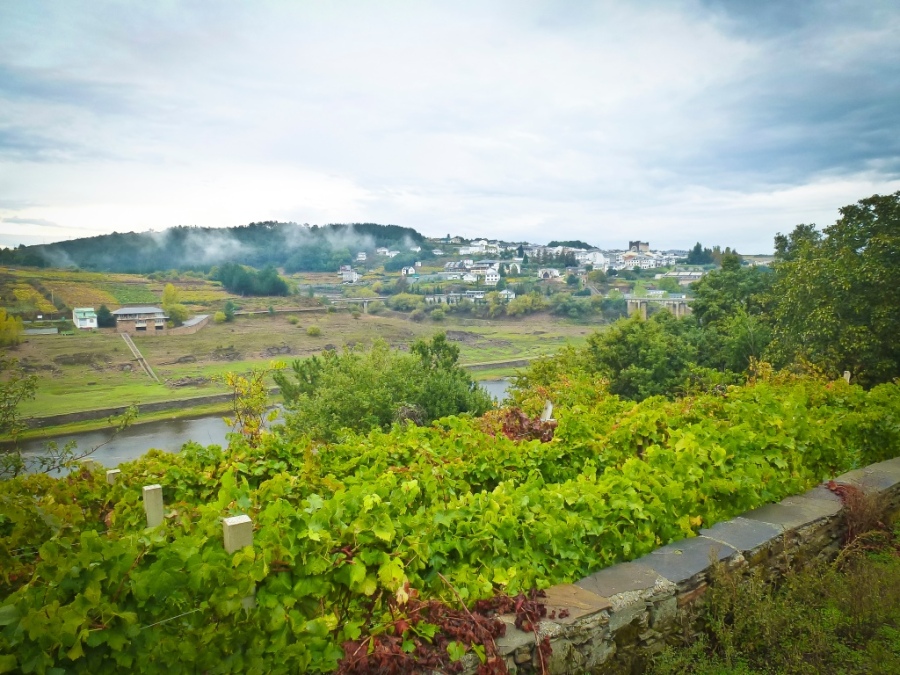 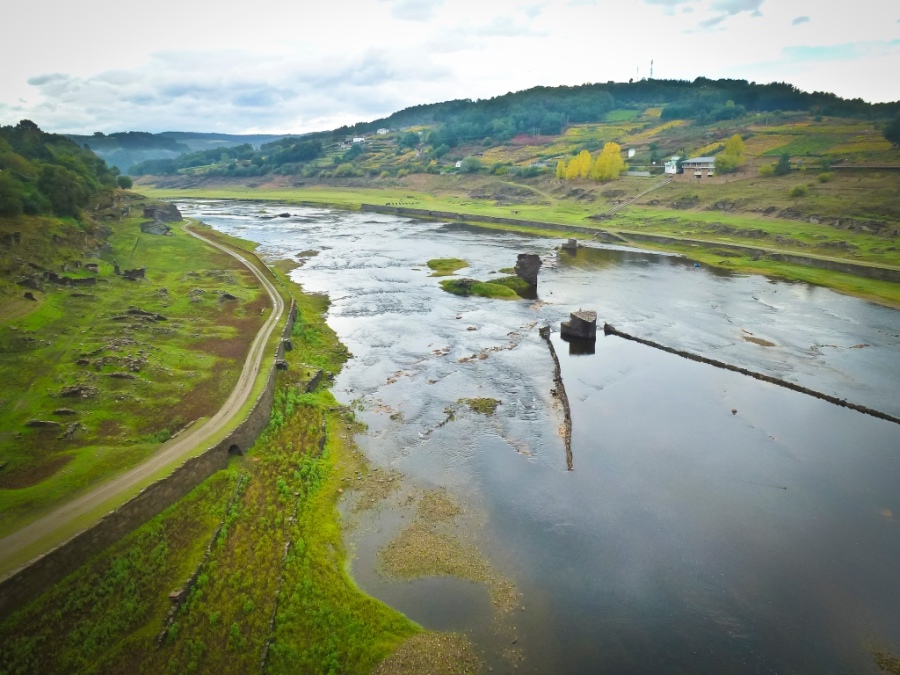 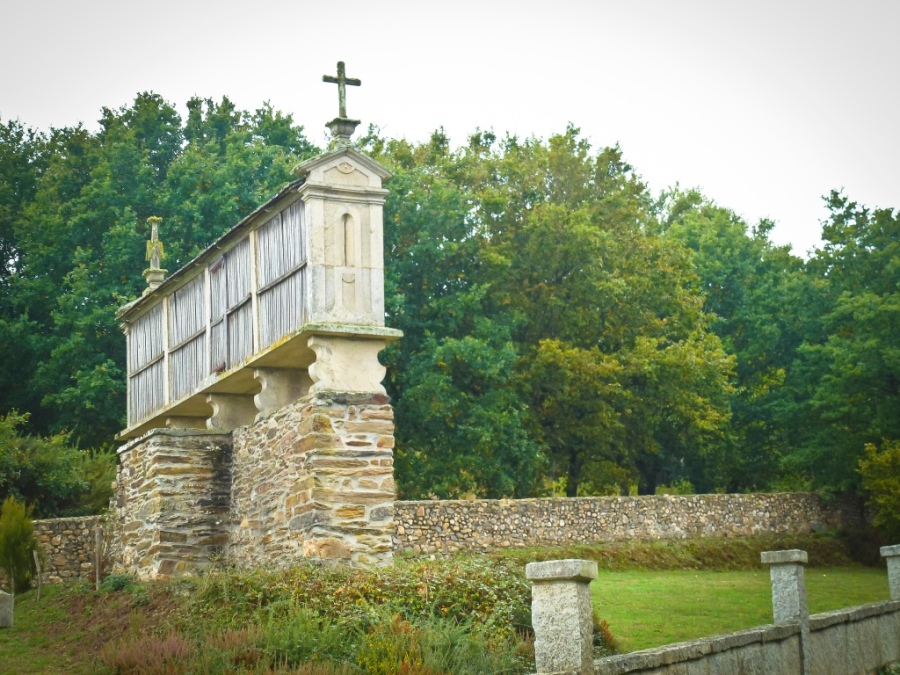 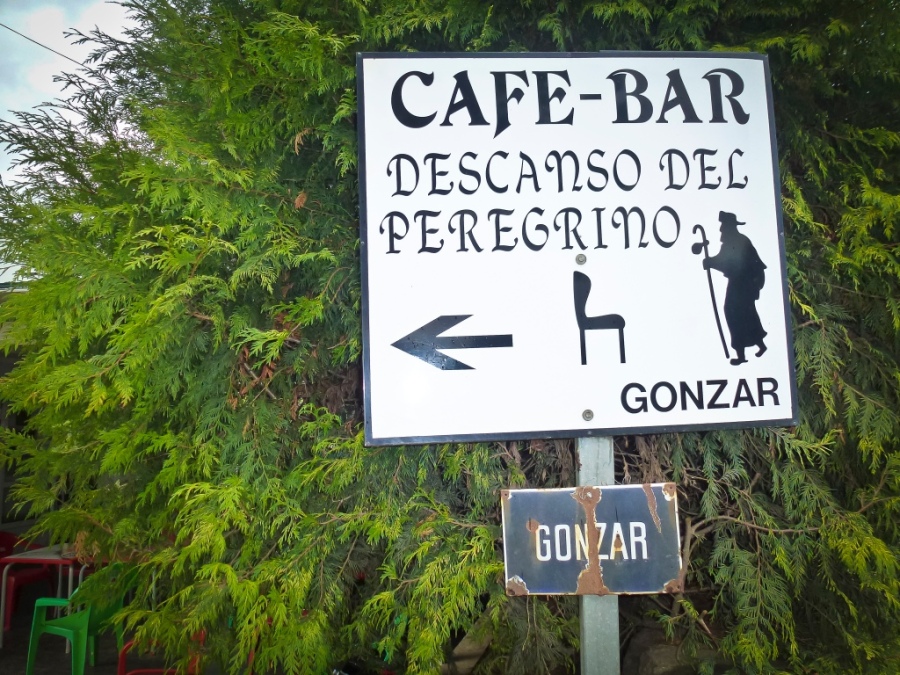 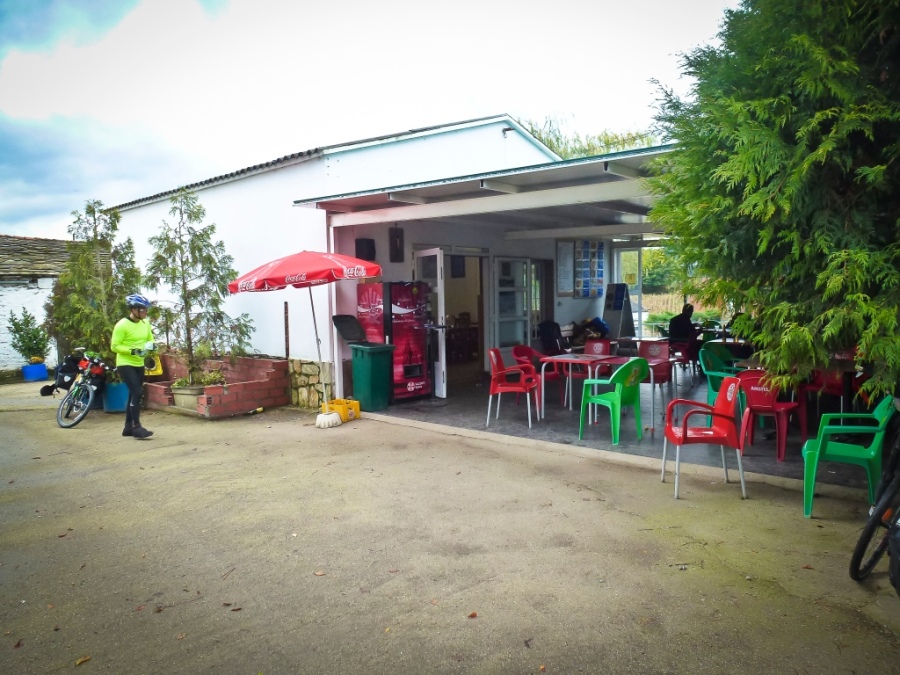 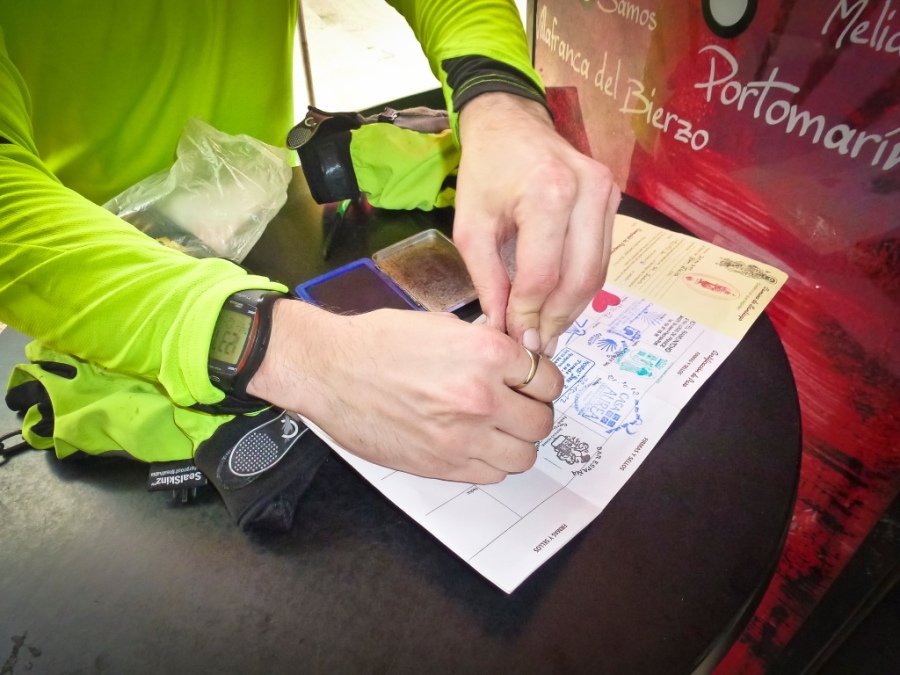 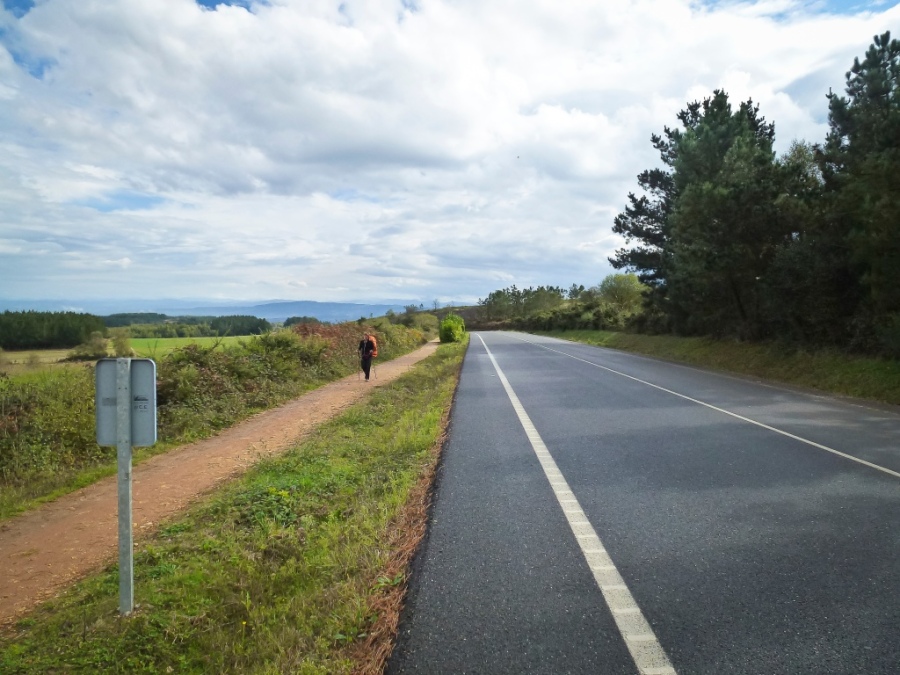 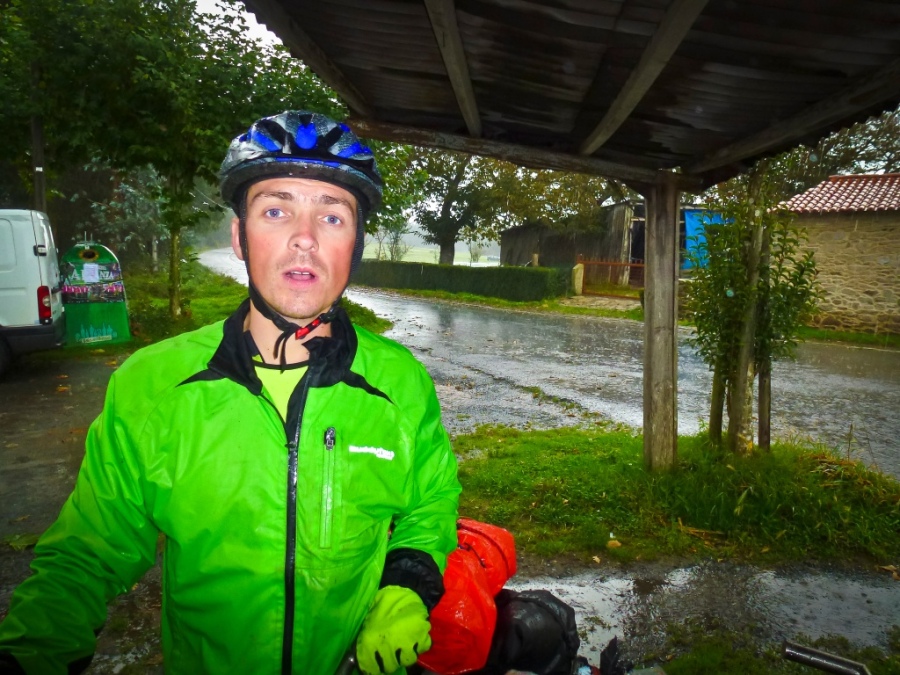 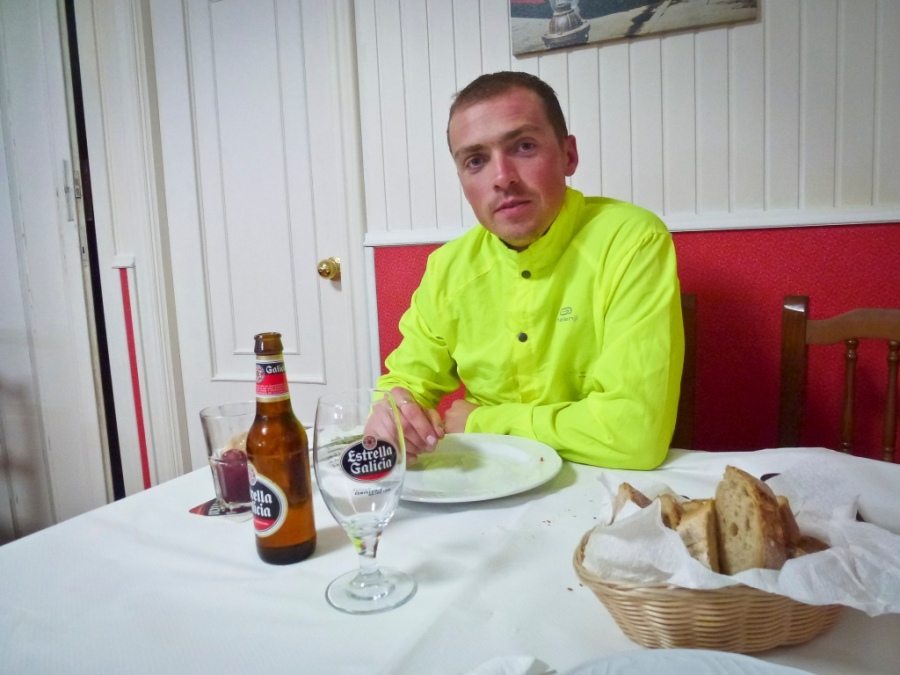 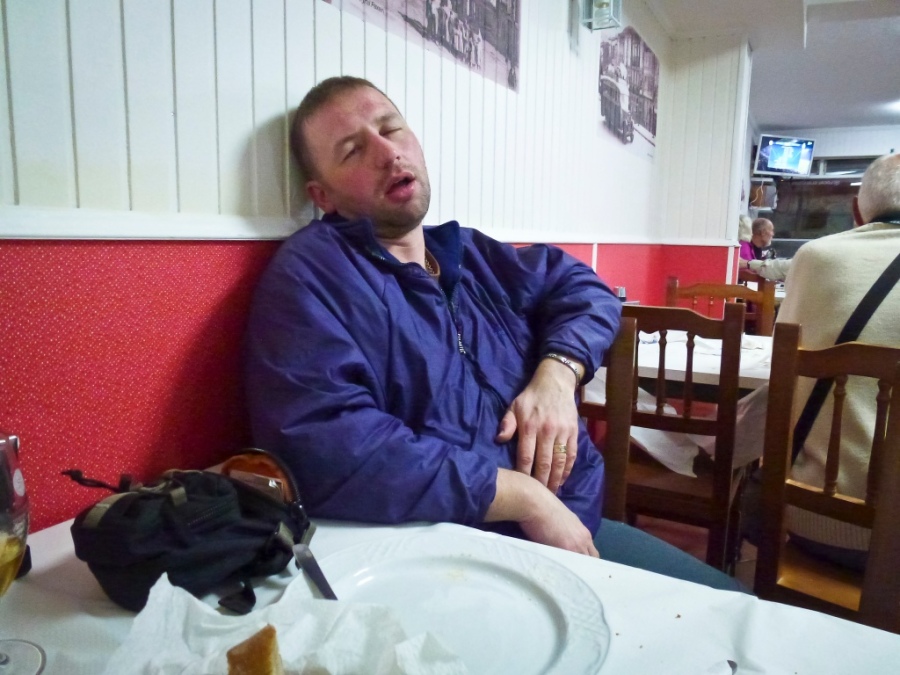 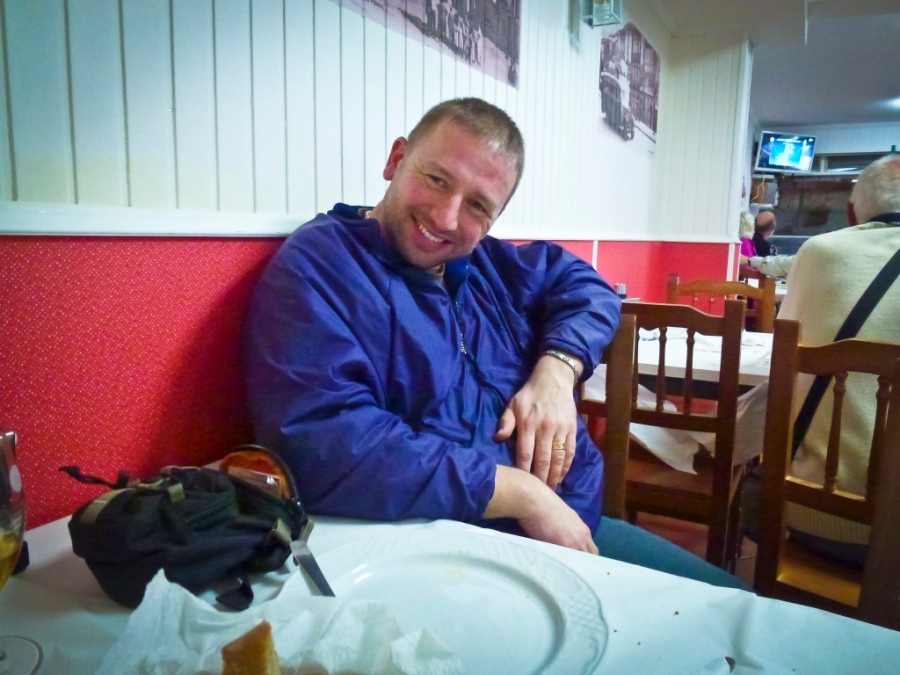 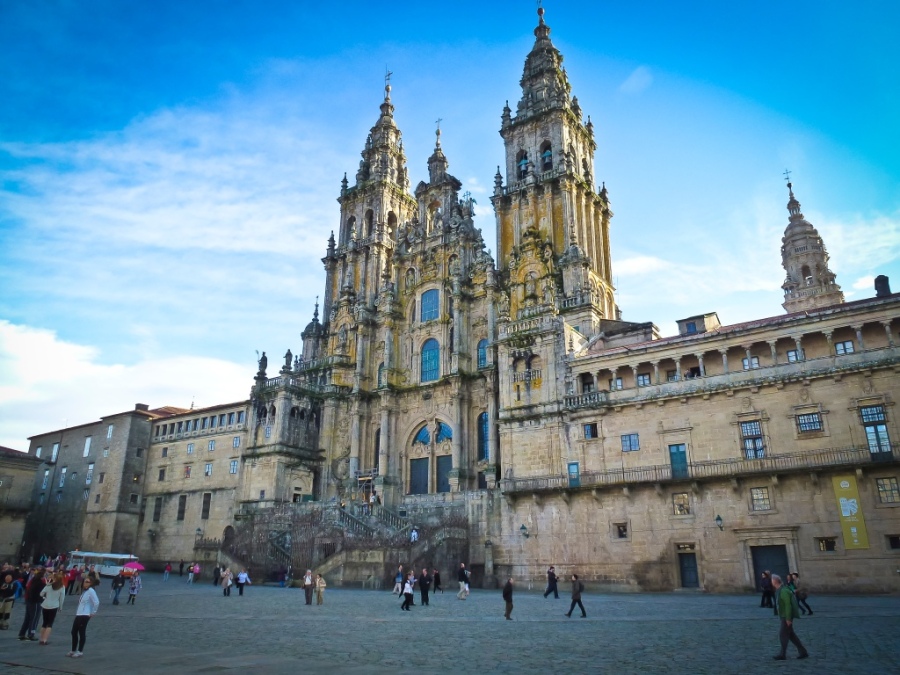